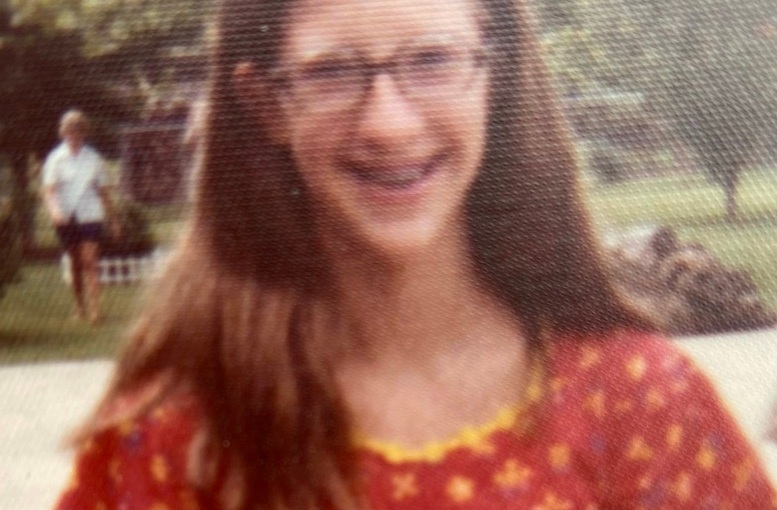 This is a photo of me the summer I was 12, in 1976. My father’s abuse of me had started the previous year, when I was 11. I have cut them out of the shot for privacy’s sake, but my half brother (six years younger) and my half sister (four years younger) are sitting on the railings either side of me.

I read Ruth Beecher’s article in History Workshop this week with great interest and recognition. It is absolutely true that the overriding cultural assumptions in my experience — during the 70’s and 80’s — were that girls who were abused were ‘flirting’, ‘playing with their sexuality’ — and ‘irresistible’. This starting point informs everything about how my early disclosures failed to get my father arrested. At the time, regardless of the law, child sexual abuse was still treated as a ‘problem in the family’. He was not considered a perpetrator, and I was not considered a victim.

It is true that from the beginning my father behaved as if the abuse happened because I was ‘so beautiful’. That he ‘couldn’t resist’. He went to great lengths to normalise this environment: men were uncontrollably attracted to girls — whether grown or not. All girls would become women, and were therefore sexual beings from the start. He was ‘safe’ because he was my father — but you never knew who else was out there. I was best off with him, because he had my best interests at heart; he could ‘teach’ me.

I ask you to look closely at this photo. I am a kid. I am a child. My father has been abusing me — touching every part of my body in a sexual way — for a year. He has shown his own sexual arousal to me in a variety of ways. He has tried and failed to make me satisfy him sexually. All before I am 13. All when I am in a training bra, wearing braces, thick lensed glasses, had not yet started my periods — and have no idea how to even begin to want to be attractive sexually, in any way. All I want to do is play, read, write, dance, and have friends.

I’m not a ‘young woman’ here. I am a child. Child Sexual Abuse is NEVER about ‘temptation’.

By the time this photo is taken, I am already struggling to feel ‘like a child’. My father’s abuse is another layer of mistreatment over my history of instability and neglect. I want nothing more than to be a child, to be ‘like everyone else’, to not be worried all the time. My father makes this impossible though, once and for all. This is what survivors mean when we say our ‘childhoods were stolen’. Because they were.

After this summer, we move to from the US to the UK for a year, to Oxford, where my father is on sabbatical. That year was one of the worst for the abuse. From Learning to Survive:

My chest aches all the time. Whenever he is in my room, I am so frightened she will walk in. She will make me leave, hate me, if she ever finds out.

There are more nightgowns in England. Eventually I am forced to wear them, albeit with underwear. His access is nevertheless direct, swift, and, I see now, opportunistic. I cannot talk to keep him away. He gets frustrated; he doesn’t have much time. He won’t listen. He wants one thing.

I make a deal with myself:

I will be a stone, cold and silent.

Like a puppet, so he has to move me.